Click the tabs below to view complete course details

We are living in a rapidly changing world! As culture changes, it is crucial for leaders to adapt to this new dynamic. Public Safety professionals live with volatility, uncertainty, complexity, and ambiguity (VUCA) daily. The scrutiny and criticism pitted against law enforcement today are unprecedented, increasing stress on law enforcement professionals around the world. MAGNUS OVEA leadership and well-being principles afford leaders the needed foundation, skills and tools to develop, maintain, and turbocharge star performance. Turbocharging leadership capacity at a personal and organizational level produces a culture of accountability and connection leading to star performance by promoting a sense of safety and support within an organization.

If you desire to improve community trust and recognize the need to reduce community criticism, Magnus OVEA is for you!

If you are looking to lead through precarious times and personally and professionally move from resiliency to antifragility (gaining from disorder), MAGNUS OVEA will deliver!

The great value of MAGNUS OVEA Leadership Principles is based on the science and practices of human behavior and are delivered in a format that is easily applicable to our daily lives to improve the leadership and well-being of each person willing to apply these principles.

This workshop introduces both a challenging and rewarding New Wave of Leadership by promoting well-being through awakening self-awareness, improving accountability, applying psychophysical responses to relationships, and positive intelligence, as well as the latest research on promoting healthy workplace environments. 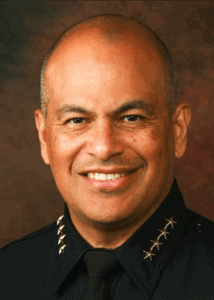 Cisneros assumed the chief’s role in August 2018. He has more than 25 years of experience, including nearly a decade serving as a police chief.

Cisneros began his law enforcement career in 1991 as a detective and police officer with the Long Beach Police Department.

Cisneros also oversaw Long Beach’s Office of Counter Terrorism, which works to detect and deter terrorism through data analysis and cooperation with regional and federal partners.

He holds a master’s in criminal justice from Chapman University in Orange and a bachelor’s in architecture from California Polytechnic State University, San Luis Obispo.

Since 2015, Cisneros has served as a member of the Orange County Chiefs and Sheriffs Association. He is also third vice president of the Hispanic American Police Command Officer’s Association and has been active with the group since 2013. 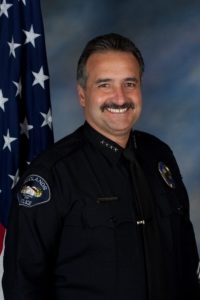 Mark A. Garcia served in law enforcement for 31 years.  Chief Garcia served as the Chief of Police for the City of Redlands for 6 ½ years, retiring in 2018.  Prior to becoming the Redlands Chief of Police, he served San Bernardino Police Department for 24 years ascending to the rank of Assistant Chief of Police.   Chief Garcia’s experience includes being Narcotics Bureau Commander, Tactical Commander, District Commander, Investigations Commander, Personnel and Training Commander, overseeing Internal Affairs and serving as the department’s Public Information Officer.  Chief Garcia has received numerous awards including the Medal of Valor, Officer of the Year and Citizen of the Year.  Some of the highlights of Chief Garcia’s career include being the point car in President Reagan’s motorcade, being responsible for external security for President George W. Bush’s visit to San Bernardino, leading Redlands through the December 02 terrorist incident and developing future leaders.

Chief Garcia’s passion for character-based leadership development led to starting Blue Virtue Leadership and he has taught hundreds of officers how to develop their leadership capacity, how to build character, how to enhance organizational culture, how to build a Virtue Based Policing structure, how to create organizational ethics programs, Service Oriented Leadership and Strategic and Tactical Decision Making. He has made numerous presentations on leadership, ethics and culture, including the Law Enforcement Leadership Symposium, California Police Chiefs Executive Leadership Institute at the Drucker School of Management, California College and University Chiefs of Police Conference, Faith and Justice Summit, University of Redlands and Cal State San Bernardino.

Chief Garcia holds a Bachelor’s Degree in Management and a Master’s of Science in Management.  He considers himself to be a lifelong learner having completed many certificate programs including the prestigious Leadership Decision Making Program, Harvard University, John F. Kennedy School of Government, Executive Education; Josephson’s Institute of Ethics Train the Trainer Program, Master Instructor Development Program and is a certified leadership development trainer for the John Maxwell Team. He serves on the California Police Chief’s Association Training Committee, and serves on the Police Public Safety, Image and Ethics Committee for the International Association of Chiefs of Police.