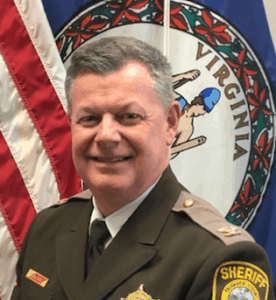 Sheriff Bob Mosier is a native Virginian with a distinguished career as a law enforcement professional.   Bob’s career spans over 30 years in local, county, Federal Government, domestic, and international law enforcement.  Bob started as a police dispatcher at age 19, and at 21 graduated with Top Overall Achievement as a Patrol Officer.  Bob served at the local level and, based on his recognized skills and abilities, quickly moved up the ranks.

While in Fauquier County, Bob began as a Deputy Sheriff, and throughout his career served as Commander of Special Operations, Patrol Division, and Criminal Investigations Division.  Bob developed and implemented community policing programs, managed security for large public events, and distinguished himself by earning numerous Letters of Commendation, two Unit Citation Awards, a Distinguished Service Award, a Community Service Award, and a Valor Award.

The personal integrity, professionalism, leadership, and managerial skills Bob developed in local law enforcement made him highly sought after for international criminal justice assignments.  In 1996 he was selected by the U.S. Department of State to serve in Bosnia and Herzegovina with the International Police Task Force as a Station Commander where he represented the Fauquier County Sheriff’s Office.  Following this assignment, Bob served with the International Justice Mission, a human rights organization, as Director of Investigations working in Asia, Middle and Near East, Africa, and Latin America.

Bob later served as a senior representative for a large and complex U.S. Department of Defense law enforcement program in which he provided daily oversight of all administrative, logistical, operational, and training requirements for 300 law enforcement professionals.  Following this service, Bob became a GS-15 Deputy Senior Executive Police Advisor for the Iraq Bureau of International Narcotics and Law Enforcement Affairs with the U.S. Department of State with oversight of 150 Senior Police Advisors.  Most recently, Bob supported the U.S. Department of Defense as the Senior Associate for Law Enforcement Operations with Obsidian Solutions Group.

Bob Mosier was elected the 60th Sheriff of Fauquier County in November 2015 and took office on January 1, 2016.  As Sheriff, he immediately implemented the plan which paved the way to change with the application to the Virginia Law Enforcement Professional Standards Commission for law enforcement accreditation.

As part of this plan and beyond, Sheriff Mosier has brought professional change to the Sheriff’s Office, embracing new technologies for the enforcement of criminal, illegal drug and gang activities, modern traffic safety concepts, enhancement of school safety and better partnerships with the community.  Agency operations have become more effective with use of the Staff Duty Officer concept to ensure the synchronization of resources among the patrol deputies and detectives, using social media outreach in the form of Facebook, twitter and YouTube to get real time information to citizens, police 2 citizen online crime reporting and town hall meetings.

Halfway through his first term, Sheriff Mosier has received recognition for his leadership from local, state and federal institutions to include the 2016 Citizen of the Year in Scott District, the Community Builders Award from the Masons Mt. Carmel Lodge 133 and Cochran Lodge 271, a Certificate of Leadership Development from the U.S. Army War College, Executive Level Management Education and Training from the National Sheriff’s Institute, 2018 Employee of the Month along with Jack Ledden, former Director for the Department of Social Services, a Certificate of Appreciation from the U.S. Department of State, a Certificate of Recognition from the Veterans of Foreign Wars Post 7728 and the 2018 MAGNUS Princeps Award from the National Command & Staff College in recognition of his efforts implementing bold initiatives that have created synergy and trust between the citizens of Fauquier County and the Sheriff’s Office.

And the capstone of Sheriff’s Mosier’s leadership plan and vision was realized on August 9, 2018 when the Fauquier County Sheriff’s Office was awarded Law Enforcement Accreditation by the Virginia Law Enforcement Professional Standards Commission (VLEPSC), having achieved a perfect score.

Sheriff Mosier was appointed by the Governor to the Substance Abuse Services Council in 2020,  he is currently the Chairman for the Blue Ridge Gang Narcotic Task Force , a member of the Board of Governors with the Center for Police Leadership & Ethics International, a member of the Board of Commissioners with the National Command & Staff College a member of the Traffic Safety Committee with the National Sheriff’s Association (NSA) and on the Board of Directors of the Virginia Sheriff’s Institute (VSI). Sheriff Mosier also serves as a board member with the Fauquier Historical Society and as a board member with the Boys & Girls Club of Fauquier County, he is also a Member Board of Directors of Anti Trafficking International (ATI), a collaborative project to end human trafficking and commercial sexual exploitation. 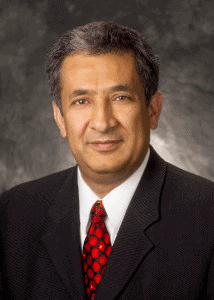 His most recent co-authored article was published in the Police Chief Magazine. Two of his coauthored articles have been published by the FBI Law Enforcement Bulletin ~ “Human Factors: Police Leaders Improving Safety While Developing Meaningful Public Trust” and “Unbundling Beliefs and Values.”  His select books include “Deliberate Leadership: Achieving Success Through Personal Styles,” “Handbook of Research on Effective Communication, Leadership, and Conflict Resolution”, and “Moral Compass for the Law Enforcement Professionals”.

Dr. Javidi was the recipient of prestigious “Person of the Year” award by the National Society of Accountants ~ Senator William Victor “Bill” Roth, Jr. “Roth IRA” received the award in the following year.