“Originally designed in 1978 by General Howard Prince and the staff of the Behavioral Sciences and Leadership Department at the United States Military Academy at West Point, “Authentic & Deliberate Leadership: The West Point Way” has been redesigned by General Prince, Dr. Mitch Javidi, Dr. Dave Mather, and the faculty at the National Command and Staff College.    The course challenges participants to bring their artful experience leading others at any level of the organization and combine it with behavioral science theories which will improve the participant’s ability to enhance the motivation, satisfaction, and performance of their people.  The course is broken down into 5 major areas as seen below. They are preceded by a short section talking about the foundation of the course and an introductory section explaining what to expect, and finally a course review that challenges participants to begin immediately applying what they have learned in their work environment.
General Prince's Welcome

You are doing very important work for America.  Our most precious value is liberty for all.  But liberty requires order and order is established through the law.  Police organizations preserve our order and hence our liberty.  So that makes the work of developing leaders noble work.  Good police leaders need to frequently remind those they lead of the honorability of what they do lest they descend into cynicism and, in the worst case, insensitivity and even brutality.

The theoretical framework of this unique and forward-looking educational curriculum was researched and assembled in the later 1980’s by my colleagues and myself at the US Army West Point, known as the “West Point Leadership” program.  The model has successfully shaped our military leaders for nearly three decades and will continue to do so.

The “Authentic and Deliberate Leadership: The West Point Way” . curriculum combined with the comprehensive proprietary modules developed for the Command and Staff College encompass some of the most important, proven leadership developments in use.  This course takes the West Point Leadership course to the next level and into this new century.

BRAVO to the College and you for defining and carrying forward the future of Law Enforcement Leadership Education and Development.

I look forward to the opportunity of meeting you in person at one of the College’s national meetings. 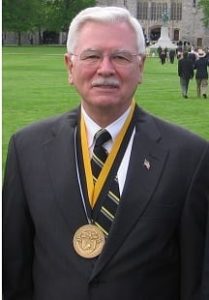 Dr. Prince was a Clinical Professor and held the Loyd Hackler Endowed Chair in Ethical Leadership in the Lyndon B. Johnson School of Public Affairs (LBJ School) at the University of Texas at Austin.  He joined the LBJ School in September 1999 and was the founding Director of the Center for Ethical Leadership. He received numerous teaching awards, including the Texas Excellence Teaching Award as the outstanding teacher in the LBJ School for AY 2001-2002 by nomination of the student body.  In 2008 he was chosen by The Eyes of Texas, a student organization, for The Eyes of Texas Excellence Award for outstanding contributions to student life.

Dr. Prince was the 1962 honor graduate of West Point and held the Master of Arts degree in International Relations from American University.  During 1965-67 he studied economics, history, law, political science and sociology at the University of Bonn in Germany as an Olmsted Scholar, and earned the Ph.D. in Psychology from the University of Texas at Austin in 1975. A clinical psychologist, he is a Fellow of the American Psychological Association.  He was also a graduate of the U. S. Army War College.  In 2006 he was selected for the highest honor given by West Point to its alumni, the Distinguished Graduate Award.

Dr. Prince was an accomplished educator and leader who held positions of increasing responsibility throughout a lifetime of public service.  He was active in promoting leadership education and leader development on the national and international levels for many years as a consultant and speaker.  In 1996 the Association of Leadership Educators honored him with its Distinguished Leadership Service Award.  In 2009 Division 19 of the American Psychological Association, the Society of Military Psychology, presented him with the John R. Flanagan Award for Lifetime Achievement.

Previously he served as founding dean of the Jepson School of Leadership Studies and Professor of Leadership Studies at the University of Richmond, where he was responsible for the development of the first undergraduate leadership degree program in the world from October 1990 until June 1996.  He then held the George and Virginia Modlin Endowed Chair as Professor of Leadership Studies until July 1997.  Before going to Richmond, Virginia, Dr. Prince was Professor and Head of the Department of Behavioral Sciences and Leadership at the U. S. Military Academy, West Point, New York from July 1978 through September 1990 where he developed both graduate and undergraduate leadership programs and was instrumental in reshaping leader development throughout the U. S. Army.

After serving for over twenty-eight years in the United States Army, upon his retirement in 1990 he was advanced on the retired list to the rank of Brigadier General and presented with the Army’s highest award for service, the Distinguished Service Medal.  While on active duty he held a variety of troop command and staff positions in the 82nd Airborne and 1st Cavalry divisions before joining the permanent faculty at West Point.  His other military awards and decorations include two awards of the Purple Heart for combat wounds, two Bronze Star Medals for valor, the Bronze Star Medal for Service, the Distinguished Flying Cross for valor, the Silver Star for valor, and the Combat Infantryman’s Badge.  He was also an Army Ranger and a senior parachutist.